SeThInk Media's sustainability matrix had the opportunity to land on the ground for the GreenLife EcoFest 2011 first year debut here in Nevada County!

How it all started was with Transition California member and author of the new book 'Urban Homesteading", Rachel Kaplan, having to cancel as a speaker at the event and us telling her we would be happy to promote her book for her that seems this event was in our home town stomping grounds.

We contacted the event director, Lori Lachman who manages the Local Green Sierra site, and made the initial inquiries.  Well one small thing always leads to another when you are committed to both the local and global efforts we decided to sponsor and volunteer the skills/talents of the SeThInk Media team towards this awesome community effort. 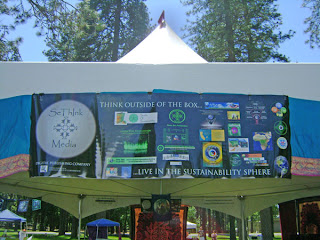 Now the challenge of downloading our online media into 3D.  We put out a post to the Transition California members announcing the event and inviting anyone interested in coming to have a "Transition Meet Up"...so we need a space...a big one.  And Michael Lefler from Life's Best Inn Tents had the 40ft beautiful hexagonal tent that would serve the purpose!

Having done event organizing in the past we jumped in as 5th wheels helping Lori and her volunteer committee round up sound systems, volunteers, food, and of course helping with the events website updates. Some of our efforts succeeded while others fell short due to the fact that we came on board in the last weeks countdown and any of you who have done events knows what a crazy time that is!  This event was being organized by a committee with zero event experience and zero budget so it was a real community effort (All Hands on Deck) that we were happy to be a part of. 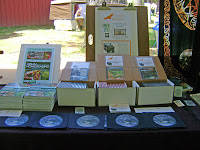 A week before the event we realized that we had not even had time to prepare our own table content and media so we ourselves were caught in a whirlwind of activity creating and ordering print media for Seeds of Sustainability, Transition California, Jayatu, Earth Charter US, Interdependent Project, A New We, and the EcoVillage Network's Low Impact Sustainable Development agenda. 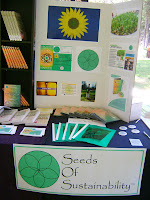 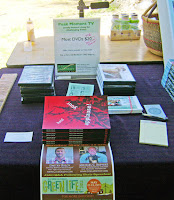 I was also asked to be a speaker at the event to share the SOS (Seeds of Sustainability) info and we made arraignments for our partner Jayatu to attend the event to do storytelling that we could film for the launch of the Jayatu Storytelling Community.
We were doing an event within an event and it was good that our team was swept up in the excited energy or we may have freaked out realizing the enormity of the task in front of us. Peak Moment TV sent us some of their media as well to have in the ever growing 'Community Conversation Cafe' (just one of the names we called our space) and speakers like Micheal Ruppert and Dimitri Orlov had their books available and did book signings after their presentations.

We had forgotten the world of paper in many ways, we were used to being able to quickly and easily present information in digital online formats.  Suddenly we were ordering hardcopies of our own DVD's, CD's, and printing mini ebooks, power point presentations, photos, and even ordering buttons/bumper stickers for the occasion.

Another factor was the weather - it had been raining quite a bit and everyone was doing their own style sun dances and prayers for sunshine.  It worked...3 days of sun (well partly cloudy) opened the gates when it was showtime. 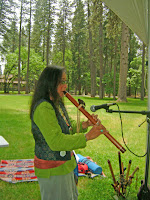 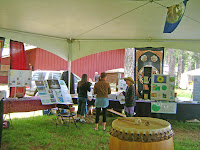 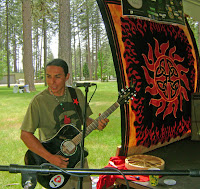 The stage was set and ready to go...but it was not until Sunday that the show really arrived in the SeThInk pavillion...like a stampede of Buffalo hearing the gathering drum in walked native musicians Good Shield and Mignon offering to play their deep messages and sound that can be only described as the heartbeat of every Earth Native that walks today.
We are now in the process of forging alliances with the local Maidu and other native groups to forward the Low Impact Sustainable Development Agenda.  We committed to sponsor and help organize the Native Village at the upcoming California Worldfest (also here in Nevada County) where we will be able to seek endorsements for the initiative.  We will be launching Good Shield's website and publishing his CD's right before the World Fest in July. 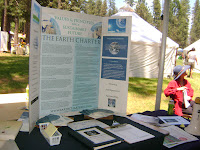 We also test drove the 'Local Endorsement' media for the Earth Charter and had information about the Earth Scouts set up in the children's tent that was hosted by the Placer Nature Center.  There was a great deal of information overload happening and unfortunately I was not able to catch as much time and space I would have liked to spent with some very awesome folks who attended.  We did manage to catch a fat stack of business cards and phone numbers though that over the coming months will be followed up with emails and phone calls. 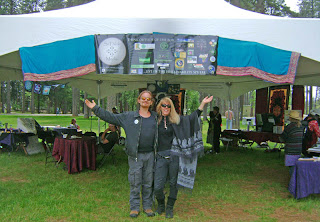 Our team was stoked to have been able to participate and contribute and we look forward to seeing what direction the path unfolds as we put on our land legs and dive into the 'Local" activity of our obviously transitioning community!


Posted by Matrix Weaver at 8:07 PM No comments: